Nginx is a great web server, but one thing it doesn't support is CGI scripts. Not all webapps need to be high-performance setups capable of hundreds or thousands of requests per second. Sometimes you just want something capable of handling a few requests now and then, and don't want to keep a long-running process going all the time just for that one webapp. How do you handle something like that under Nginx?

Well, it turns out you're going to have to have something running as a long-running external process to help Nginx out (because Nginx can't spawn processes itself). It just doesn't have to be dedicated to any one particular webapp. One way to go would be to setup another webserver that can do CGI scripts, and have Nginx proxy to that when need be.

But Apache's a fairly big program, has lots of features, a potentially complicated configuration. Kind of defeats the purpose of going to a lighter-weight program like Nginx. What else can we do?

Many Unix-type systems will have a super-server available to launch daemons as need be when some network connection is made. On BSD boxes it's typically inetd, MacOSX has launchd, Linux distros often have xinetd or other choices available.

If we already have a super-server running on our box, why not setup Nginx to connect to that, and let the super-server take care of launching our CGI script? We just need one extra piece of the puzzle, something to read a web request over the socket Nginx opened up, setup the CGI environment, and execute the script.

Wait, that sounds like a web server - aren't we back to something like Apache again? No, it doesn't have to be anything nearly that complicated if we were to use the SCGI protocol, instead of HTTP.

SCGI is a very simple protocol that's supported by Nginx and many other webservers. It's much much simpler than FastCGI, and maps pretty closely to the CGI specfication, with one minor difference to note...

In the CGI RFC, the response may contain an optional Status line, as in:

In the SCGI protocol, the Status line is required, not optional.

Nginx will function with the Status line missing, but there'll be warnings in your error log.

If you can alter your CGI scripts to include a Status line, or live with warnings in logs, we have a way forward now.

I've got a C project on GitHub that implements this small piece of glue to turn a SCGI request into a CGI enviroment. The binary weighs in at around 8 to 12 Kilobytes after being stripped. 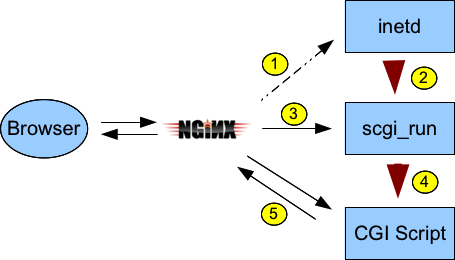 A couple things to note here

The scgi_run code on GitHub operates in two modes:

A simple setup looks something like this, assuming you've compiled scgi_run and have the binary stored as /local/scgi_run

Which causes inetd to listen to a Unix socket named /var/run/scgi_localcgi.sock, and when a connection is made, it spawns /local/scgi_run with argv[0] set to /local/scgi_run and argv[1] set to /local/cgi-bin/. As a bonus, the socket ownership is set to www:www and chmoded to 0600, which limits who can connect to it.

And then for a simple script, you might have /local/cgi-bin/hello.sh as

That you would run by hitting http://localhost/local-cgi/hello.sh

So, with the help of a tiny 8KB binary, Nginx (or any other SCGI client) with the help of a super-server like inetd can execute CGI scripts (keeping in mind though the requirement for the Status line). It's a fairly lightweight solution that may also be useful in embedded situations.

Enjoy, and go buy some harddrives to store your CGI scripts on, I hear SSDs are very nice. :)