I got a chance to try Enhanced PXE booting with iPXE on an OpenBSD box and found a couple things that don't work...

Firstly the stock DHCP daemon does not support if statements in the configuration, so this bit to keep iPXE from being told to load iPXE (a loop) didn't work

To get it to work I had to follow the alternate advice on the chainloading documentation about Breaking the loop with an embedded script.

However, recompiling udnionly.kpxe on OpenBSD 4.9 failed, with the error:

While doing more reading on PXE as a followup to Setting up a PXE environment for OS installations, I ran into iPXE, which has some interesting features which can simplify PXE booting. The main feature that caught my interest was HTTP support - meaning it can fetch various modules, kernels, etc from a web server, which in general is much more customizable and configurable than stock TFTP servers, and also much faster.

It took a while to figure out where it all fits into a boot stack, I thought I'd share what I've roughly figured out and gotten to work.

This diagram shows where we ended previously previously with installing Ubuntu over a network: 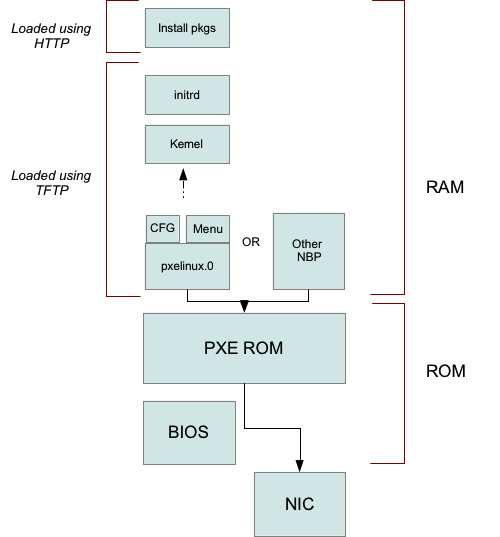 The PXE stack would obtain from a DHCP server the IP address of a TFTP server and the name of a Network Boot Program (NBP) such as pxelinux.0

pxelinux.0 would then fetch a config file, and the config file fetched a menu module. Depending on what was selected from the menu, a Linux kernel and initrd could be fetched and booted, and then the Ubuntu installer presumable in the initrd would fetch additional install packages from an HTTP server.

Let's see what iPXE can do for us.

I didn't actually try this because it doesn't seem practical on a large scale, but you can on many NICs replace the stock PXE ROM with iPXE, giving you an arrangement like this: 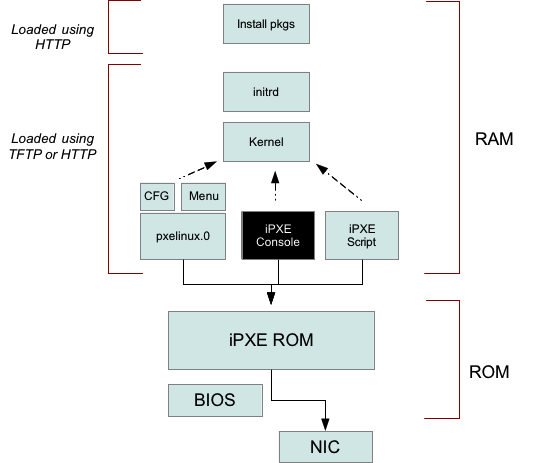 A few things to note here:

As I mentioned, I don't think it's practical to go around flashing various NICs and motherboards, but there's another way to use iPXE....

There's a version of iPXE that can be chainloaded, so that you're using the stock PXE on your machine to bring in the enhanced iPXE stack. Here's the big picture first: 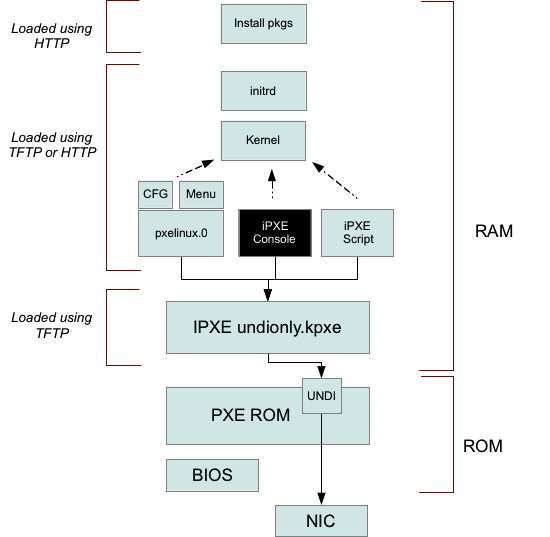 One of the APIs a PXE stack makes available is UNDI (Universal Network Device Interface), giving a simple device driver for the NIC that an NBP can use. We can configure DHCP to load undionly.kpxe as our initial NBP, it will use the UNDI part of the stock PXE ROM (so it doesn't need to be configured for any particular NIC), and it will start the PXE cycle again (querying the DHCP server for an IP address, the name of an NBP, etc...), but with all the extra features of iPXE available.

We need to use a bit of logic in the DHCP config so that the iPXE stack isn't also told to load undionly.kpxe (basically causing a loop). This can be done in ISC dhcpd with an if statement:

One cool thing about this setup is that we only need to make one file available through TFTP, undionly.kpxe. Everything else can be served up by an HTTP server like Nginx. This is great because HTTP servers are generally more configurable than a stock TFTP server, plus you aren't limited to serving up static files - some of these requests from iPXE could be handled by CGI scripts or other webapps for more of a dynamic behavior.

If iPXE is the active PXE stack, then PXELINUX gains the ability to use HTTP urls for module names, for example, an Ubuntu install might point directly into a mounted ISO image shared on the web like:

So, drop iPXE's undionly.kpxe into your TFTP server, configure DHCP to give it out as an NBP only if a non-iPXE stack is asking, and you can use HTTP for everything else.

Previously, we looked at Setting up a PXE environment for OS installations. This post will build on that by adding the MemTest86+ to the PXE environment, so you can easily run memory checks on network-connected machines.

This will be a really easy one. First, download the MemTest86+ binary into your /tftpboot directory and decompress it:

Edit the /tftpboot/pxelinux.cfg/default file to add this menu entry for MemTest

That's it, you should now be able to run MemTest over the network.

One extra thing to point out in case you're interested...

The PXELINUX menu entry above says linux memtest86+-4.20.bin instead of kernel memtest86+-4.20.bin because when you use the kernel keyword, PXELINUX looks at the file extension '.bin' and treats the file like a CD boot sector (which it is not in this case). When I tried kernel I just got a stream of:

The SYSLINUX wiki mentions this on the Common Problems page.

If you're fooling around with various OSes, installing them by first burning CDs or DVDs gets to be a drag - and you end up with piles of old discs that just go into a landfill. Sure, there are rewritable disks, but they wear out and get scratched eventually. USB memsticks can be painful too - sometimes difficult to create and with different BIOSes having different levels of support.

A slick way to go is to set yourself up to do PXE (Preboot eXecution Environment) installations over a network. Most network cards have had PXE support included for many years now. If you have a machine handy that can act as a simple server, you can have an enviroment where you boot a machine, select the OS you want to install from a menu, and everything will just be pulled over your local network.

There are plenty of writeups on how to PXE install Ubuntu from an Ubuntu server, or FreeBSD from a FreeBSD server - but to make things more interesting and explicit I'll go cross-platform and talk about deploying Ubuntu Server 11.04 from a FreeBSD 8.2 server, and try to make it general enough so that later on we can add other OSes to the menu such as CentOS or OpenBSD.

PXE booting a machine requires two basic services be present on your network:

OSes such as Ubuntu or CentOS require a third service:

For the Network Bootstram Program, we'll use PXELINUX, which is available as part of the SYSLINUX project. The name SYSLINUX is a bit misleading in that it's not actually Linux, but rather a collection of bootloaders that are often used with Linux, and capable of loading other OSes as well. Think of something more along the lines of GRUB, than an actual Linux distro.

To start off with, I'll create a /tftpboot directory, download syslinux-4.04.tar.gz from here, extract and copy two files we want:

We're done with the syslinux download now, so you could clean it up if you want with:

Next, create a configuration directory

and in that directory create a file named default with these initial contents:

That should be enough to get us a barebones menu when we PXE boot a machine, with a single option to boot off the local harddisk (we'll get to Ubuntu later).

TFTP is already included in FreeBSD, just need to make sure it's enabled.

In /etc/inetd.conf make sure this line has the default # removed from the front (so it's not commented out)

In /etc/rc.conf, make sure inetd is enabled, adding if necessary:

Depending on what you had to do above, start, or reload the inetd daemon with:

Check that the machine is now listing on UDP port 69

See if you can fetch the NBP using the tftp utility (assuming your server's IPv4 address on the network you'll be doing PXE boots is 10.0.0.1)

If it works you should have seen somthing like:

For this part I'm assuming you're running an ISC dhcpd server (if not, we'll have to cover that in another post). You basically just need to add two lines to /usr/local/etc/dhcpd.conf telling a client what server to use for TFTP and what NBP to fetch:

On my server, I just wanted to do this on one particular subnet, so there's a chunk that looks something like this now:

Give it a try

On your client machine, you may have to poke around in the BIOS to enable PXE booting. You'll have to figure out this part for yourself. If you can select your Network Card as the boot device, and everything else is working right, you should see a simple menu something like this: 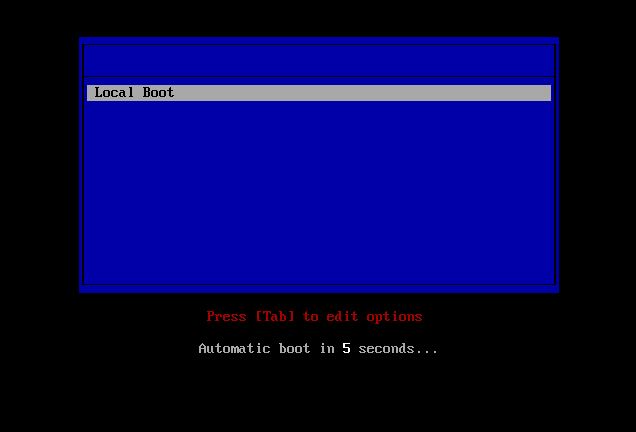 OK! we're at the "Hello World" stage, we know the client and server are doing the bare minimum necessary for PXE to function at all. Time to move on to the good stuff.

For this next step, I'll assume you've downloaded an ISO into say /foo/ubuntu-11.04-server-amd64.iso The specific version shouldn't matter too much, so if you want to do 10.04 LTS or something else, it should all be about the same.

Mount the ISO image, so we can copy a couple files into /tftpboot and share the rest with a web server.

So now our /tftpboot directory has these five files underneath it:

To the /tftpboot/pxelinux.cfg/default file append

Try PXE booting your client again, this time you'll have "Ubuntu 11.04 Server AMD64 Install" as one of your choices, select that, cross your fingers, and if all goes well in a few seconds you should see: 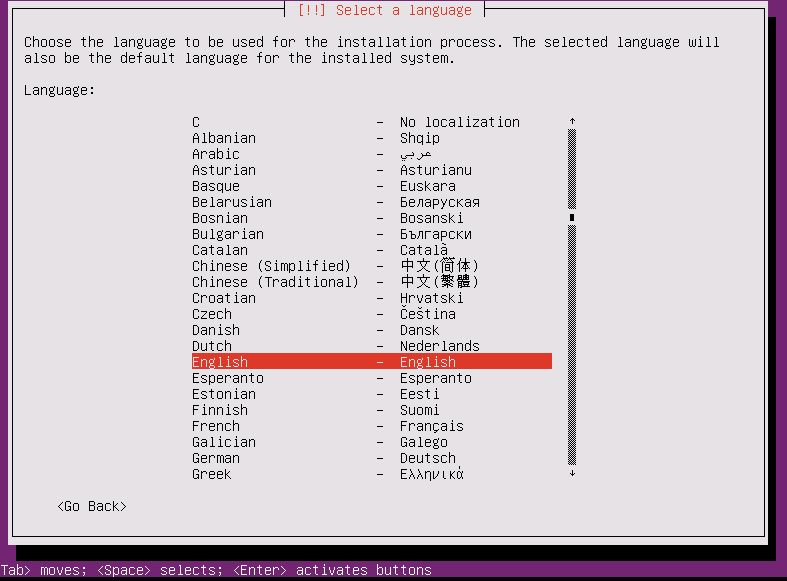 and you can go through and answer the initial questions about the install.

If you're OK with pulling the bulk of the OS over the internet from the official Ubuntu mirrors, it should work although it might be slow. Since we have a nice server sitting on our LAN with a copy of the ISO, we should setup to use that and do a much faster install.

For this example, I'll assume nginx has been installed as the webserver (any one will do though, so if you've already got apache installed - that'll work fine too).

The default nginx install uses /usr/local/www/nginx as its docroot, lets put a symlink to our mounted ISO image in there:

and also put in a minimal Debian Installer "preseed" file in there that'll help things along by telling the installer to use our webserver for the installation packages. Create a text file named /usr/local/www/nginx/ubuntu-11.04-server-amd64.txt with these contents:

Edit the /tftpboot/pxelinux.cfg/default file and append

to the end of the append line of our Ubuntu section, so it now looks like:

Try PXE booting the Ubuntu install again. You'll still get some initial questions about language and keyboard (we can deal with those in another post), but you shouldn't be asked about mirrors - the installer will know to pull files from your local webserver.

Go through the install on the client, watch the /var/log/nginx-access.log file on the server, you'll see the installer fetching all kinds of files, so you'll know it's all working.

So at this point you've got yourself a working PXE installation environment and can do a basic Ubuntu server install.

By adding a few more parameters to your seed file and the PXE configuration you can eliminate some of the installer questions. I'll probably write about that in another post, but if you want to figure it out yourself, check out the Ubuntu Installation Guide - Appendix B. Automating the installation using preseeding

There's so many things you can do with the PXE menus, kernel options, and so on - it can't all be covered in one place. But hopefully you've got a good starting point now, if you know all the basic services are in place and working.