Integrated Windows Authentication (IWA) is a useful feature for intranets, where a web browser on a Windows client joined to Active Directory (AD) can seamlessly pass authentication information to a web server - without needing to prompt the user for a password. It's supported by IE, Firefox and Chrome on the client side, and naturally by IIS on the server side. With just a little bit of effort, it can also be supported by Apache on a Linux or other Unix-type OS, and I'll take a look at doing that here.

IWA is a generic term that covers a few different protocols. One is the older NTLM Authentication, which can be setup on a Linux server with mod_auth_ntlm_winbind, but that's awfully clunky and requires setting up and running Samba's winbindd daemon. Another is Kerberos, which is fairly well supported in must Linux/Unix distros, and is an integral part of Active Directory.

There are a lot of writeups on integrating a Linux box with AD, but most of them get very complicated, trying to integrate everything, including login, file sharing, group mapping, etc. And deeply relying on Samba. I'm going to focus on just the one simple task of HTTP authentication in Apache, not using Samba, and being as explicit as possible on what needs to be done on both the Linux and Windows Active Directory sides of the setup.

I'm going to do this for Ubuntu 10.04 and assume you have root access and are familiar with general Apache configuration. Other Linux distros or perhaps BSDs should be very very similar.

Some other things you're going to need to be able to do, or at least get someone in you organization to do for you are:

For the rest of this, we're going to assume:

Firstly, we need a User object in Active Directory that will represent the Apache service, and will hold a password which Kerberos tickets will be based on.

In the Active Directory Users and Computers utility, create a User object, the name doesn't matter much, so I'll go with Test-HTTP after hitting Next >, on the password page uncheck User must change password... and check Password never expires. Go ahead and enter anything as a password, it'll get changed to something random in a later step. Go ahead and finish that up.

Next, we need to associate a Service Principal Name (SPN) with the User object we just created. Kerberos principals are usually <protocol>/<domain-name>@<kerberos-realm>. Since we're doing a web server, it'll be known in Kerberos as HTTP/test.foobar.edu@AD.FOOBAR.EDU Run this in a Command Prompt window:

(note that we left off the @AD.FOOBAR.EDU part, setspn knows to put that in)

Lastly, we're going to create a keytab file (I'll call it test-http.keytab), which holds encryption keys based on the User object's password. When a client requests a ticket to access our Linux box, AD will locate the User object based on the SPN we associated with it, and use the same encryption keys to create the Kerberos tickets our Linux's Apache will be setup to require.

(This is a one-line command, but I'm going to display it below as several lines for readability)

The +rndPass changes the User objects password to something random, you don't need to know what it is - the keytab is the thing you really care about here.

Securely copy that test-http.keytab to the Linux box, and delete it off the Windows machine. We're done with AD now, back to the real world...

Move the keytab file somewhere handy, such as /etc/apache2/test-http.keytab, and set the permissions so that the Apache process (and nobody else) has access:

You'll need an /etc/krb5.conf file. A simple one that leaves it up to Kerberos to discover what it needs might be as simple as:

That sort of thing is documented on the MIT website.

We're in the home stretch now, Apache directives to protect a cgi-bin directory for example might look like:

Those last 5 lines inside the <Directory> block are the key here. The KrbServiceName of HTTP corresponds to what we entered as the protocol part of the principal name back on the setspn and ktpass commands. The AuthName is what will be displayed if the browser falls back to basic autentication if Kerberos is not available.

Here's a super-simple CGI test.sh script we can put in our Kerberos-protected cgi-bin directory, be sure to make it executable.

Go to a Windows client signed into Active Directory. To get IE or Chrome to attempt Kerberos authentication you'll have to add test.foobar.edu to the Local Intranet in the Internet Settings control panel. Here are some shots of where to go: 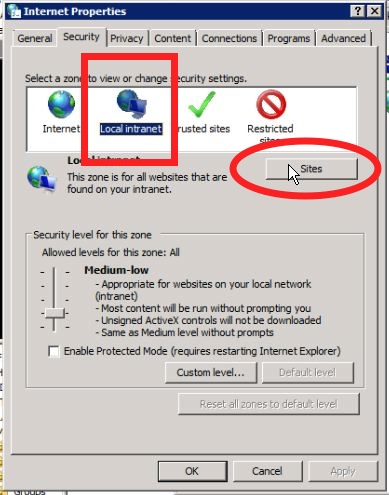 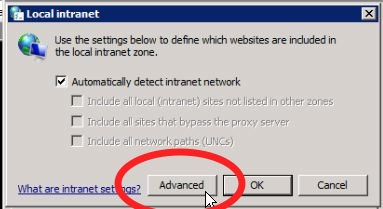 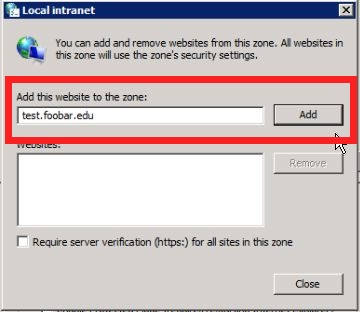 For Firefox, you'll want the NTLMAuth add-in, which lets you specify which domains that Firefox should attempt Kerberos authentication with.

Once you've got the browser fixed up, try accessing http://test.foobar.edu/cgi-bin/test.sh, and if everything works out, you should be rewarded with something like:

If you didn't follow the steps to configure the browser to attempt Kerberos auth with the site, the browser should pop-up a userid/password box, and if you enter the correct info, it should show the same info.

So there you have it, after 15 minutes of work you can now have a webpage tell you what your own AD userid is. OK, it's probably more useful than that - you can now write webapps proxied behind Apache, such as a Django app, that just have to look at the REMOTE_USER variable to tell who's on the other end of the connection.

You'll probably not want to require Kerberos auth for the whole app, but all you really need is to require Kerberos for one particular login URL that sets your userid into a session, and leave it up to the framework to check the session for authentication on the rest of the site.

In one of my FreeBSD 6.2 jails running Apache, even though the server seemed to respond ok, I saw lots of these errors in the logfile:

Google searching found lots of other people asking about this, but I didn't really see any good answers. Others complained about the same thing on port 80

Seems to fix the problem

I've been doing a lot with Django lately, and initially set it up using mod_python as the Django docs recommend, but still have some reservations about that kind of arrangement. I'd like to go back to running it under SCGI or something similar.

Django has support builtin for FastCGI, but after trying to install mod_fastcgi in my Apache 2.0.x setup, decided it was a PITA. mod_scgi is quite easy to setup in Apache (even though the documentation is mostly nonexistent). After finding where Django implements its FastCGI support using the flup module, I saw that with just a few minor tweaks Django could be made to support all of flup's protocols, including SCGI and AJP (Apache Jserv Protocol).

AJP turns out to be very interesting because it's included standard with Apache 2.2 as mod_proxy_ajp, and can work with mod_proxy_balancer - meaning you could setup multiple Django instances and have Apache share the load between them.

After testing a bit, I submitted a patch, and will probably switch to running my Django sites as AJP servers managed by daemontools, and frontended by Apache 2.2

Just as a followup, it seems the segfault in mod_python on FreeBSD I mentioned before was found and fixed. Turns out to not be any kind of pointer/memory corruption like I thought, but rather a mishandled return code from an APR (Apache Portable Runtime) function. Oh well, I got to play with gdb, ddd, and valgrind a bit, which is good stuff to be familiar with.

Ran across Mark Mayo's blog entry: FastCGI, SCGI, and Apache: Background and Future, which discusses exactly the things I've been struggling with this weekend. I have to agree that sticking an interpreter like Python directly into Apache is a lot of trouble. I've delved into Apache sourcecode, and the mass of macros and #ifdefs is enough to send you running away screaming. To try and graft Python onto that is just begging for trouble - and I've had some experience myself with grafting interpreters onto other things.

Anyhow, thought I'd mention this because Mark's writeup made a lot of sense to me and I thought it was worth keeping a link to it.

I've been testing mod_python 3.2.x betas as requested by the developers on their mailing list. Unfortunately there seems to be some subtle memory-related but that only occurs on FreeBSD (or at least FreeBSD the way I normally install it along with Apache and Python).

Made some mention of it here and an almost identical problem is reported for MacOSX, even down to the value 0x58 being at the top of the backtrace.

Did a lot of poking around the core with gdb and browsing of the mod_python and Apache sourcecode, but never quite saw where the problem could be. Took another approach and started stripping down the big mod_python testsuite, and found that the test that was failing ran fine by itself, but when it ran after another test for handling large file uploads - then it would crash.

So I suspect there's a problem in a whole different area of mod_python, that's screwing something up in memory that doesn't trigger a segfault til later during the connectionhandler test. My latest post to the list covers some of that.

Out of curiosity, ran the Apache Benchmark program ab on the plain CGI installation of PyBlosxom on my little server (-n 100 -c 10), and got around 1.5 requests/second. Decided to give SCGI a try, and got some better results.

Went about this based on what I had read in Deploying TurboGears with Lighttpd and SCGI. Tried Lighttpd at first, and it mostly worked, but I've got an Apache setup right now, so wanted to stick with that for the moment (and it seems a bit quicker anyhow). Basically started by loading flup with easy_install.

Copied the config.py and wsgi_app.py files from the PyBlosxom distribution into a directory, and added this little script into that same directory:

Notice how the scriptName and bindAddress parameters in the Python code are matched in the SCGIMount Apache directive. With this setup, running the same ab benchmark yields about 10 to 15 requests/second - not too bad. Running the threaded SCGI server (remove the _fork from the first import line) wasn't as good, only 3 or 8 requests/second.

The setup seems a bit shaky in that the benchmark values seem to keep decreasing with every run, especially in the threaded mode. So there may be some problems in my setup or in flup/scgi/pyblosxom_wsgi.

Even if it was working fine, SCGI is probably overkill for running PyBlosxom when you're not expecting a lot of traffic. And if you were, you'd probably run it with --static to generate static pages. But it was a reasonable thing to fool with for the day when you want to run a more dynamic WSGI app.